The Punata alluvial fan is located at the east part of the Valle Alto Valley (Department of Cochamba). The Valle Alto is part of the inter-Andean valleys system of Cochabamba. This system is formed by Cochabamba, Valle Alto, Sacaba and Santivañez Valleys.  They conglomerate more than 600000 inhabitants, and the main social and economic activities of central Bolivia, takes place in this system. 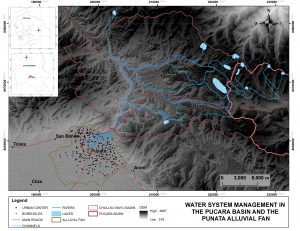 The Punata aquifer consists of an alluvial fan which is flanked in the North and East by the Tunari mountainous massif. From the Southeast to the West, the fan is limited by a clay fringe. The topography is mainly Northeast-Southwest gently sloping with altitudes around 2700 m.a.s.l. The extension of the alluvial fan is around 90 km2. The main urban centre is the Punata city in the middle of the fan, and water from the aquifer is used for the water supply of the city and for agriculture. The climate is semiarid, with an annual average precipitation of 350 mm and potential evapotranspiration greater than 800 mm. The wet (November to March) and dry (April to October) seasons are well marked, more than 85% of the total annual precipitation occurs during the wet season. The water levels in the aquifer are declining which is a sign of overexploitation.