The study area is bounded by latitudes 1735’ S–1800’ S and longitudes 6659’ W–6712’ W, and it covers about 500 km2. The average elevation in the plateau is about 3700 m above sea level (masl). The surrounding landscape is mountainous, divided with ridges parallel to each other in NW–SE direction, reaching 5500 masl in high peaks. The region is characterized by semiarid climate; the average temperature is about 10 C and the rainfall is in the range of 300 to 500 mm/y with a markedly wet summer, from December to March, during which the high-reaching anticyclones over the subtropical Andes produce about 80% of the annual recipitation. The potential evaporation in the region is around 1.5 m/y.

The delimitation of the study area is based on geological features and outcrops which enclose a substantial part of the aquifer system; nevertheless, as the sedimentary deposits cover greater areas in the region, some flow systems could cross the assumed limits. The regional geological features are dominated by two units; the first composed by outcrops of Silurian rocks and the sporadic presence of Tertiary and Devonian sediments (purple and brown colors in geological map); and the second by Quaternary deposits controlled by glacial, lacustrine, and fluvial processes (yellow color).
Sedimentary units were the result of weathering and erosion of rocks in the mountain range, where the action of water led to the formation of terraces and alluvial fans. Those Quaternary deposits, commonly including colluvium, colluvium-fluvial, fluvial, fluvial-lacustrine, fluvial-glacial, and terraces, composed by coarse to fine grained sediments (pebbles, gravel, sand, silt, and clay) cover most of the flat study area. 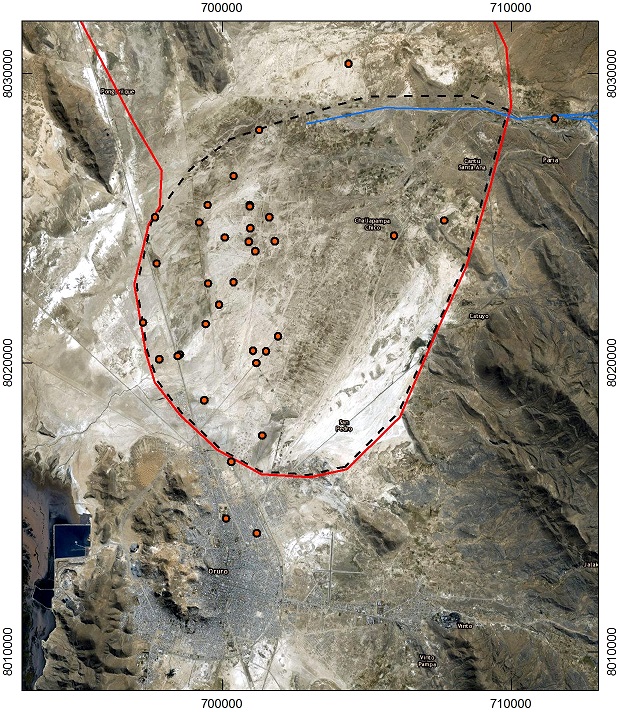