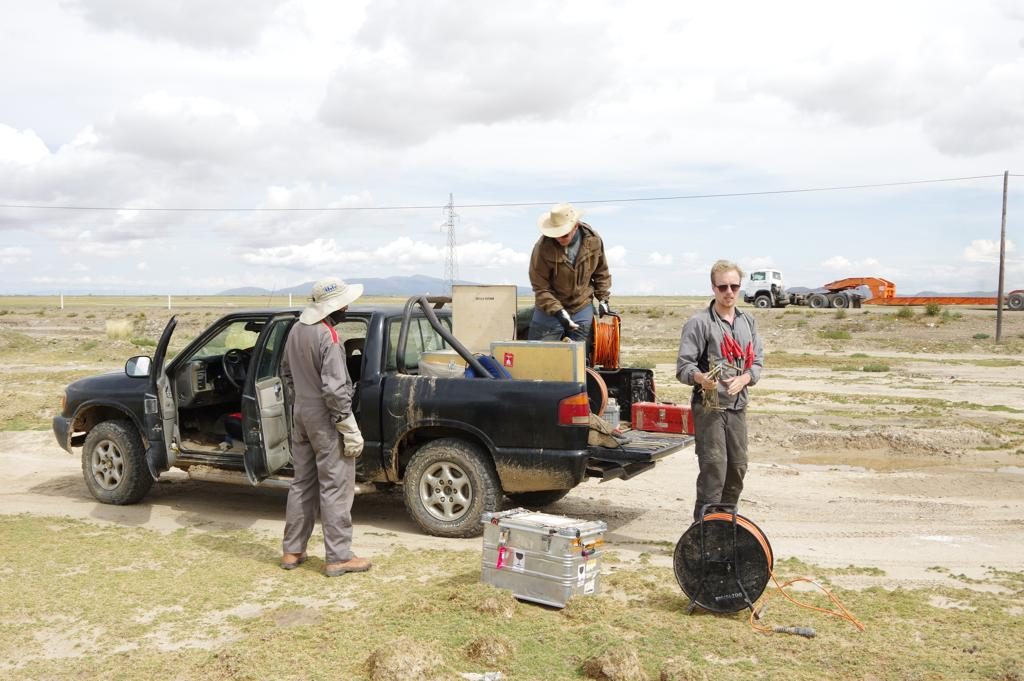 In this study, electrical resistivity tomography (ERT), induced polarization (IP) and transient electromagnetic (TEM) measurements were carried out to investigate features in the Challapampa aquifer, located on the Bolivian Altiplano north of the city of Oruro. Oruro presently cannot satisfy the demand for water and Challapampa aquifer acts as the main source of drinking water for the city. The objective of this study was to investigate fault systems and thermal water intrusion in a study area located in the aquifers south eastern part.

The ERT method uses an array of electrodes, set up along the surface or in boreholes, to generate resistivity-depth cross sections of the subsurface. The time-domain IP method uses the same electrode configurations as the ERT method but instead measures potentials during charge up or directly after the current is shut down. The IP method can thus be used to determine the chargeability (or IP-effect) of a geological material.  For the TEM method, a direct current is sent through an ungrounded loop. When the current is shut off, the magnetic response of the ground is measured as induced current in receiver(s) on the surface.

Challapampa aquifer consists of Quaternary sediments of fluvial and alluvial deposits from lakes and rivers that have occupied the Altiplano for thousands of years. The bedrock that lays beneath the Quaternary sediments consists of sandstone and shale with intrusion of magmatic rock in some parts. The fault direction of the bedrock on the Altiplano shows a Southeast-Northwest trend. In the southeastern part of the aquifer within the study area there are some hot springs where the thermal water is believed to origin from fractures in the bedrock where the magmatic rock has intruded into the sandstone. In the part where the hot springs are the water is salty, which indicates that the thermal water from the hot springs leads to a salt intrusion in the southeastern part of the aquifer.

In some parts of the study area, measurements were planned but could not be executed due to villagers not allowing measurements to take place on their land.

This entry was posted in